Last May I saw a dove on our balcony. She was flying in and out, carrying twigs and dry leaves in her mouth, fussing over the flower pot occupied by our geranium; much like a human moving into a new apartment.  She had picked a perfect spot: the highest point on the balcony, always in the shade, with easy access to the ledge. The balcony is just high enough so that the neighboring roofs were slightly below her line of vision and she had a clear view a few blocks into the distance.

The top of the flowerpot was above my line of vision, too high for me to see what exactly was going on without climbing onto something, but if I extended my arms all the way up, I could reach it with my phone camera and take a picture.  I waited for her to leave, then I snuck out onto the balcony, raised my phone high, and snapped a picture. Sure enough, there was a nest there! Not a perfect one, not at all like what you see in books or in cartoons where nests look like perfect bowls, meticulously and elaborately woven out of long thin twigs. This one was just a bunch of sticks and dried grass covering the soil, but thanks to the little wall created by the top of the flowerpot, it was a functional nest. The geranium leaves and flowers had long outgrown the pot and were hanging below it, attached to the soil only by several long, branching stalks. 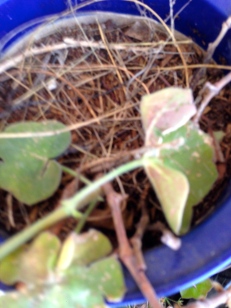 While I was busy studying the picture, the dove returned from her errand but she didn’t approach our balcony. Instead, she eyed me warily from the rooftop across the alley. I decided to cede the space to her, and I returned to our living room. A few minutes later she was at it again. This time, she wasn’t alone: I saw two birds bringing the building materials to the flowerpot.

For a while, I watched them through the glass door. I couldn’t tell them apart. Most likely, this was her mate and they had both been working on the nest the whole time, taking turns. I had believed there was one bird flying in and out, but there had been two. 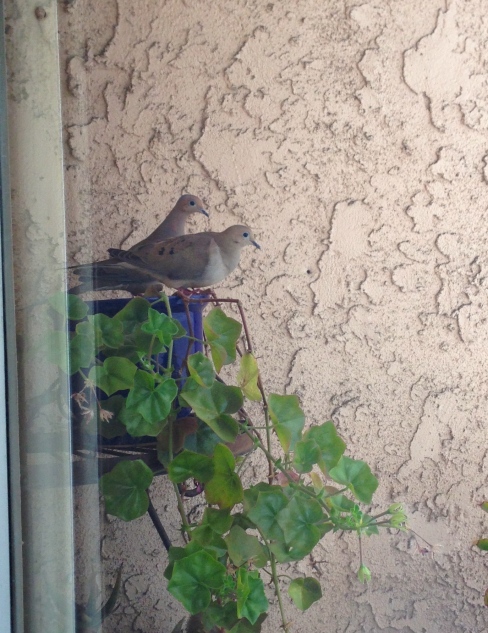 The activity continued into the evening. When I woke up the next morning, the balcony was quiet and it seemed uninhabited. Thinking that the two birds had found a better place for their nest on someone else’s balcony, I was simultaneously relieved and disappointed.

Intending to clean the mess I assumed they’d left behind, I grabbed a roll of paper towels, opened the balcony door, and froze! The dove was sitting on top of the flower pot, perfectly still, as if asleep—except that her eyes were open. She turned her head slightly in my direction, probably to assess the threat I presented. Quickly and quietly, I retreated into the living room. 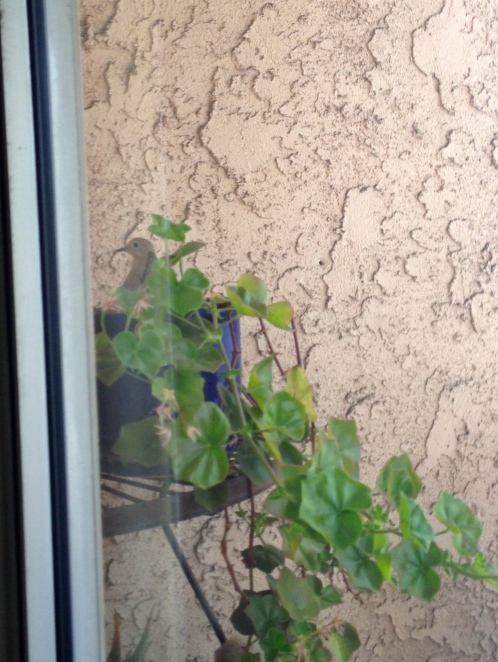 She continued sitting, throughout that day and that night and the next day, patiently, persistently; from time-to-time, she’d leave to run brief errands, but she always returned promptly, not giving me enough time to poke around the area. I knew there had to be eggs in the nest and I hoped to catch her just as she was leaving, so I’d have enough time to take a photo of them. Finally, in the late afternoon of the second day I saw her as she was getting ready to fly away. As soon as she cleared the area, I rushed to the balcony, reached up with my phone, and snapped a picture.

There were no eggs! Just dry twigs, bird droppings, and our poor geranium’s long, knobby stalks, pressed down and over the side of the flower pot. The dove was sitting in an empty nest! At first, I thought she had just realized the nest was empty and that was why she’d left.  But, she soon returned and resumed her sitting, serene and content, as if nothing was wrong!

I scoured the internet for information about the procreation of doves, and I found lots of fascinating stuff, although how true it was, given the internet’s reliability, well … I’m not sure. Here are some (alleged) facts:  The gestation period is about two weeks. Both male and the female doves sit on eggs, in shifts. And yes, it is possible for them to be unaware that there are no eggs; they sit anyway, in an empty nest, for the prescribed period of 14 to 16 days!  I haven’t been able to confirm this last claim and I don’t remember where I saw it, but it did help explain our doves’ predicament. (I’d recently started referring to the birds as “our doves.”)

I don’t think I had ever felt that much empathy for a bird!  Our poor doves: sitting on dry, barren twigs, expecting a miracle that would never come.  Perhaps the eggs were actually there and I didn’t see them? I fervently hoped this was the case. The alternative was too heart-breaking.

While poking around the internet, I discovered that my experience was far from unique. Thousands of people have had doves nest on their porches, their balconies, on top of their French doors, and elsewhere on their properties, and hundreds of them had described the experience in short stories, on discussion websites, and in blogs—all more beautifully than I ever could.  Our stories, however, shared some common traits.

First, we were all touched by the experience. Second, many of us, especially women, worried about inadvertently hurting the doves, for example by opening the French doors and dislodging the nest that was sitting there, or by watering the plants in pots where the doves had chosen to nest. These people wanted to know how to go about their daily chores and routines without harming the birds. Third, us city folks were intellectually quite unprepared for this encroachment of nature into our urban lives and we tried to force the experience into our existing worldview every which way we could. It was clear from the various “There are doves on my property, what should I do?” websites that most humans (myself included) thought that the birds couldn’t possibly know what they were doing and that without our—human—intervention, they would somehow mess the whole thing up!

I have to say this for my fellow humans, however: the vast majority of their questions were kind-hearted and compassionate in tone, in spite of the fact that, universally, their intention was to discourage the doves from settling on their property, or, failing that, to “humanely” destroy the eggs already deposited in the nest…

For the next two weeks the dove was a constant source of worry for me. By now I knew that the male and the female were taking turns, but I couldn’t help referring to the sitter as “she.” “Is she hungry?” I wondered. “Is she bored? What could she be thinking, sitting there all day with nothing to do? Is there any way I could provide her with some entertainment?” I never quite brought this next thought to full awareness, but I did briefly catch a glimpse of it at the edge of my consciousness: “I bet she would be much happier if she had a TV!”

Then a cold spell came, with rain and wind. That brought a whole new set of concerns. Are doves’ feathers waterproof? (Our balcony is covered, but some rain still splashes inside.) Is she cold? We have the heat on inside, but what about her? Should I cover her with a little blanket?

Then, one day I walked onto the balcony and she was gone! The nest, above my line of vision, seemed abandoned. I grabbed my phone, lifted it up, and snapped a picture. The eggs had not been imaginary after all! In the flowerpot there were two tiny squabs (baby doves), seemingly made entirely out of fluffy dull-gray feathers, without any flesh or bones! They didn’t appear to be alive.

I set my phone camera to video and held it above them for a couple of minutes. I then breathlessly reviewed the recording, looking for something that would indicate they were breathing—a movement of chest or head – but they were completely motionless. I replayed the recording one more time, desperately looking for any trembling or fluttering, anything that would constitute proof of life, but I found nothing. On the third try, however, I became aware of barely audible high-pitched peeps. At first, I couldn’t figure out where they were coming from, but then I realized I was listening to the sound track to my recording! The two baby doves didn’t seem to move, but they peeped! (In fact, judging by the state of their feathers, I later learned—after another trip around the internet—that they must have been several days old.)

My relief, however, lasted only a few seconds. I immediately became anxious all over again. Are they cold? Are they hungry? Will their parents come back to feed them? What if they don’t? Could I do it? What do baby doves eat?

Of course, the parents returned and fed the babies and spent time with them. In a matter of days, the little birds grew bigger and stronger. Their peeps could now easily be heard in our living room.

Finally, one day I looked through our balcony glass door and saw the baby doves outside the nest! One was on the balcony floor, hopping back and forth as if impatiently waiting for something. The other was standing on the railing, his attention focused on the roof across the alley where both of his parents were waiting, coaxing him to fly.

It took a few tries. He flapped his wings, took off, briefly hovered in place above the abyss, then quickly returned to the safety of the railing. (From my perspective, the whole project seemed like madness doomed to failure. Each time I was terrified that he would plummet to the ground, that his small, tender body would be smashed against the concrete below. “What are his parents thinking?” I couldn’t help wondering. “Why are they putting their baby through this dangerous routine? How do they know he’s ready?”)

Eventually, the young dove took off and did not return. Halfway across the alley he lost elevation and dipped dangerously; but, he furiously worked his little wings, got back on course, and after a while reached his destination. There was no fanfare, no celebration of his success. He simply joined his parents on the roof and all three now waited for his sibling.

The sibling flew up from the floor of our balcony to the railing, paused there flapping his wings, and then, after just one aborted attempt, he too flew across the alley. After that, alternating between hopping and flying, the two baby doves followed their parents who led the way to the next roof and the next and the next, further and further away, until the whole family was gone, leaving nothing behind but the mess in the geranium pot.

The sun sinks into the Pacific Ocean. 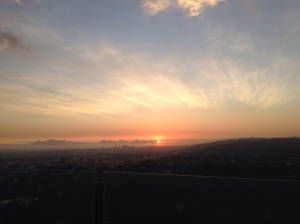 “Agreeable arts are those which have mere enjoyment for their object. Such are all the charms that can gratify a dinner party: entertaining narrative, the art of starting the whole table in unrestrained and sprightly conversation, or with jest and laughter introducing a certain air of gaiety. … there may be much loose talk over the glasses, without a person wishing to be brought to book for all he [or she?] utters.”

Where the sunlight meets the light of a lamp 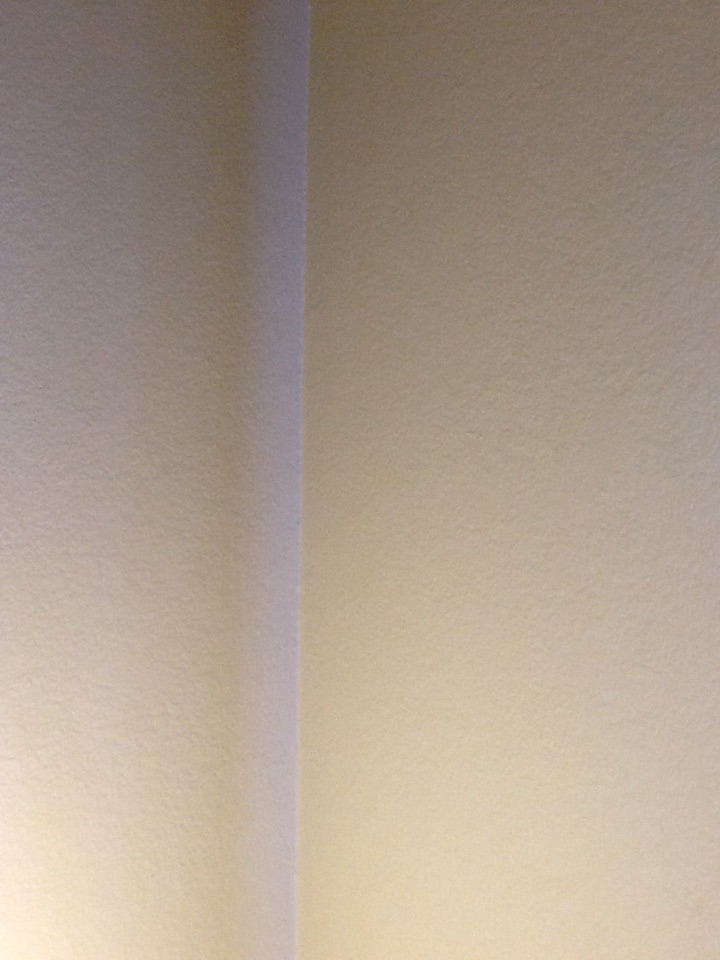